Half the Sky Screening Wrap Up

Expressions of interest for 100 Women’s inaugural grants are now open, with three organisations standing to gain up to $40,000 to fund programs that support a world where all women and girls can live safely with access to health, education and economic freedom.

100 Women has attracted 65 members that have donated $1200 each. It needs another 35 philanthropists to join their ranks to reach the target of $120,000 by September.

The good news was announced at a sell-out screening of the documentary Half the Sky at the State Library of Western Australia, when 200 people watched the harrowing yet inspiring stories of women and girls who endure horrific gender discrimination and abuse.

100 Women Chair, Alicia Curtis, said, “You don’t have to be rich to be a philanthropist; our model allows ordinary people to join a giving movement that is bringing about meaningful change to vulnerable women. I am confident that Perth has 35 more people who are ready to commit and have the privilege of being among the first 100 Women.”

Rabia Siddique confirmed that abuse is on our doorstep, with one in two Australian women being exposed to it, while Rachelle Towart, summed up 100 Women movement’s spirit as she encouraged the audience to “Get off the island called someday and be specific about what you want and how you will achieve it.”

100 Women is a Perth based giving circle which launched in March this year. It enables everyday people to be involved in creating a world where all women and girls can live safely with access to health, education and economic freedom. They do this by combining member donations to provide impactful grants to causes that support the 100 Women vision.

All donations to 100 Women are fully tax deductible and 100 percent of donations received will be given out in grants. For more information on joining email info@100women.com.au

For more information on the grants or the expression of interest process that closes on 1 September, visit 100women.com.au/grants/  or email grants@100women.com.au 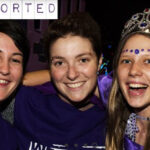