Picture this, you’ve just received an eviction notice from your Real Estate agent because you skipped a few rent payments and have struggled to catch. On top of this you’ve just received bills for water, electricity, and gas. Why do they always seem to come at once? On the upside your Centrelink payment has just come through but you realise you’ll only be able to afford ONE bill if you’re going to try get back into the black with your rent. Forget about eating for this week, you just not going to be able to afford it.

If you were forced to live off $260.00* a week could you do it?  Greens MP, Adam Brandt, tried to live off Newstart allowance for a week in 2013 and couldn’t do it calling the task ‘impossible’. This is the reality for approximately 700,000 people at this moment in Australia who are looking for work. This figure does not include young people seeking further education on Youth Allowance or Austudy or the children of adults on Newstart or the elderly on a pension.

Currently, 15% of the population would be considered living in poverty.  In WA alone approximately 230,000 people live below the poverty line; an increase of more than 20,000 from 2012. Poverty is defined as living on an income of less than $400.00 per week and being unable to meet the costs of basic needs, such as food and shelter. Even WA’s primary food donation charity, Foodbank is struggling to keep up with demand having turned away 8,800 people last month due to lack of resources.

Nearly 10,000 people in WA are homeless with poverty being a major risk factor. A significant proportion of these are children and a larger proportion is people escaping domestic violence situations. A recent study found that when women became homeless they spent longer living in crisis accommodation or sleeping rough than men. This week (12 – 18 October) is Anti-Poverty Week. If you want to help make a difference in someone’s life and reduce the impact of poverty join 100 Women. If you join before 30th October you will have a chance to have your say and vote for one of our grant recipients. Join today as a full member of a part of one of our mini-circles here.

*(figure based on current Newstart rates for singles)

If you would like more information about poverty in WA check out the links below. 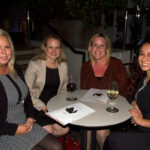